Pharma 2020 The Vision Which Path Will You Take?

Pharma 2020: The vision which path will you take? 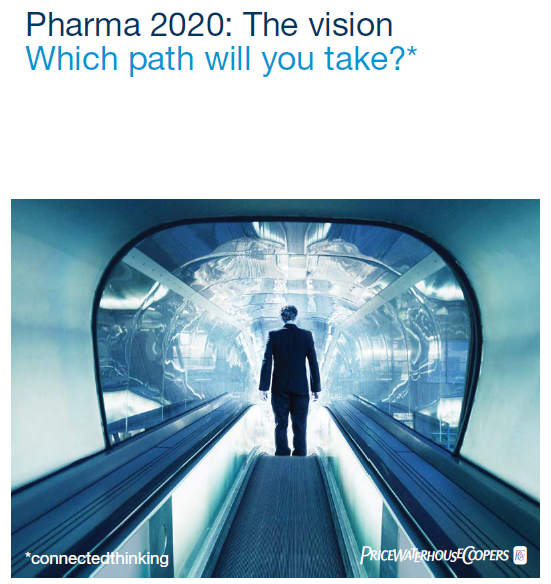 Demand for effective medicines is rising, as the population ages, new medical needs emerge and the disease burden of the developing world increasingly resembles that of the developed world. The E7 countries – Brazil, China, India, Indonesia, Mexico, Russia and Turkey – are also becoming much more prosperous, with real gross domestic product (GDP) projected to triple over the next 13 years. By 2020, the E7 could account for as much as one-fifth of global sales.

Yet the biopharmaceutical sector
(Pharma) will find it hard to capitalise on these opportunities unless it can change the way in which it functions. Its core problem is lack of productivity in the lab. Several external factors have arguably exacerbated the industry’s difficulties, but the inescapable truth is that it now spends far more on research and development
(R&D) and produces far fewer new molecules than it did 20 years ago. The shortage of good medicines
in the pipeline underlies many
of the other challenges Pharma faces, including its increasing expenditure on sales and marketing, deteriorating financial performance and damaged reputation.

At the start of the decade, many people thought that science would come to the industry’s rescue and that molecular genetics would reveal numerous new biological targets, but the human genome has proved even more complex than anyone first envisaged. It is no longer the speed at which scientific knowledge is advancing so much as it is the healthcare agenda that is dictating how Pharma evolves.

The first part of our report highlights a number of issues that will have a major bearing on the industry over the next 13 years. The second part covers the changes we believe will best help pharmaceutical companies:

Tweet
More in this category: « Financial Services Technology 2020 and Beyond: Embracing disruption Ultimas Noticias Sobre El COVID-19 »
back to top

Nissan, this means making cars that are more efficient, more beautiful, more inspiring and more human than ever before. It means, simply, making cars that change the world and the way we move through it.

SUEZ imagines innovative solutions to accompany its clients in the transition from a linear model that over-consumes resources to a circular economy that recycles and values ​​them.

HP create technology that makes life better for everyone, everywhere: every person, every organization, and every community in the world. This motivates and inspires us to do what we do.

Siemens is a global powerhouse focusing on the areas of electrification, automation and digitalization. One of the world’s largest producers of energy-efficient, resource-saving technologies.

Enterprise Greece is designed to promote and support Greece’s substantial investment opportunities and to engage the global business community with (first-class) high end export products—goods and services made in Greece.

@AxiomGroupe is very proud to present one of our speakers at our EHS towards 4.0 event, Bas Vennix, the director of… https://t.co/9r7bSt68xR